There’s nothing glamorous about spare parts. Not only do they cost money and take up storage space, but their owners actively hope that they will never actually be needed. So it’s no wonder that many companies simply don’t pay any attention to spare parts management. What they fail to realize is that implementing a coherent system to record their spare parts stock, manage it in the long-term and adjust it to suit changing circumstances can deliver significant savings potential and efficiency gains. This can involve huge sums, even in mid-sized companies.

Spotting the problems on the balance sheet

The biggest problem in spare parts management is often the lack of an overview of what parts have been purchased and stored – as was the case at the major food producer in our example. Rather than one person in the company having overall responsibility, the managers at the individual production sites purchased the spare parts they required from different suppliers independently, without following a uniform standardization strategy. This resulted in spare parts with the same function but slightly different designs being stored in 30 locations across the six plants.

Although the company did record everything that was on the shelves, the overall system was rather informal and based on experience, instead of following a systematic plan. Once spare parts were purchased, the process was completed. But parts were not categorized by various criteria, even though this is essential for ongoing management of spare parts stock. This meant the food producer was also missing the opportunity to sort parts by criticality; in other words, how important they were for keeping production running smoothly, as a shortage of highly critical parts could bring the entire operation to a standstill.

Although the high number of storage locations is understandable – given that production managers want short distances between the machines and the spare parts they need – managing spare parts by location increased the variety of parts and, in turn, the costs in the long run. And naturally, stock levels mounted higher and higher. A glance at the company’s figures quickly identified the source of these inefficiencies. We linked the value of the spare parts in stock with the corresponding annual procurement volumes to give a rough comparison showing how many years’ worth of annual spare parts requirements were in stock. If this value is significantly greater than 1, the company has more than a year’s worth in stock – which usually means there is potential for optimization. This information is a quick and easy way for companies to estimate the rough potential for reducing their inventory.

Getting your spare parts inventory in order

The first step is to identify the proportion of dead stock; the parts that are useless because the corresponding machines are no longer in use or parts that have been in storage for too long to be suitable for use. In total, this category was worth around 2,5 million euros.

The ideal stock level for each item depends on how often it is used, how easy it is to predict its use, and how important it is for production capability (criticality). Regular demand for wearing parts (maintenance parts) is typically easy to predict, so a comparatively low stock level is enough here. Items that fail without notice (repair parts) and that are critical for production capability, on the other hand, need to have higher stock levels. Optimizing stock levels here identified a further 4 million euros in potential savings. Comparing the actual and target stock levels showed which items wouldn’t need to be ordered in the near future, as enough spare parts were in stock to cover the remaining run time for the corresponding systems. Procurement can be reduced or even halted
for specific items until enough parts are drawn from stock to reduce inventory to target levels (cost avoidance). In tandem with that, the amount of capital tied in spare parts can be reduced on an ongoing basis.

How to achieve long-term results

As well as optimizing operational processes, it is important to implement lasting processes and work instructions, so that spare parts procurement is transparent and traceable in the long-term.
This involves a certain amount of centralization of spare parts management, as achieving the desired results will be harder if each site continues to manage stock itself.

That shouldn’t be interpreted as unconditional support for centralization, however; having one central spare parts warehouse is often not the best solution for a company that has a high level of vertical manufacturing and operates a lot of different machines. A central warehouse typically only makes sense if a new plant is being planned, as implementing one retroactively is normally far too expensive. But the same or similar setups should already be managed centrally, so implementing virtual centralization for decentralized storage is an important step here. Simply bringing in “virtual pooling” reduced the inventory of standardized items used across locations by another 26 %.

Centralizing how spare parts are ordered is another important step, as the fact that individual plants are no longer placing their own orders means there is no chance of them accidentally working
against the overarching spare parts strategy. Implementing a new structure and assigning clear responsibilities enables staff to see what items are in stock and where they are held. They also now know when specific items have to be reordered for all storage locations and what quantities are required.

In addition, we have specified which parts should be used preferentially in the future and where they should be ordered from – in other words, a standardization strategy. Not something that was possible previously with 30 different storage locations, each with someone different in charge, with spare parts for the same machine purchased from different suppliers or even different manufacturers, making it impossible for the company to move parts between locations where necessary. Thanks to the new measures, the company is now in a stronger position to negotiate
with suppliers, because it is placing orders in line with the standardization strategy and for larger quantities (as requirements are grouped centrally) delivering significant savings.

Reducing storage capacities has also freed up space that can be used to expand production capability and increase profit; yet another indirect positive effect of proper spare parts management.

The final step in projects involving spare parts management is to make sure that new mechanisms are embedded in the long-term. Falling back into old habits is often a danger when
external parties bring in new ideas and then leave the company again after a certain period. In order to avoid this, we have defined strict processes and rules, and implemented a stringent and transparent monitoring system for inventory management, in addition to setting up the spare parts strategy and determining ideal inventory levels. 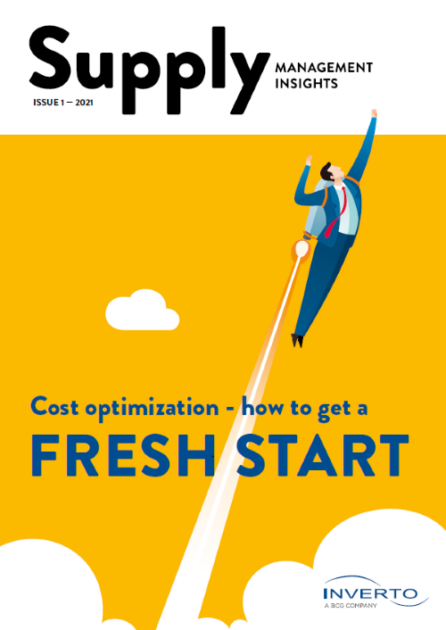 Read in the cover story of our digital magazine how to put this into practice and learn in our expert interviews what role cost reduction in procurement plays in companies.

Other interesting contents of the magazine issue: